Ironic. Because my father like his father before him works in the tea-gardens.

As a child, I thought it was one of those burn-the-tongue, fiery hot beverages, a stark opposite to the tooth-numbing ice-creams, meant to be had by grown-ups.

Coffee, was still a once in a while deal. But tea? Argh! Not at all.

I think I must be in the 9th grade in boarding school when I was introduced to actually drinking it as a beverage. I don’t know whether it was the monotony of hostel food, or a way to give company to a tea-drinking friend, but one hot April I tasted the elixir that was to appear in a zillion Facebook updates, and spam friends and strangers, leading a couple to ‘unfriend’ me too. (I’m sure). 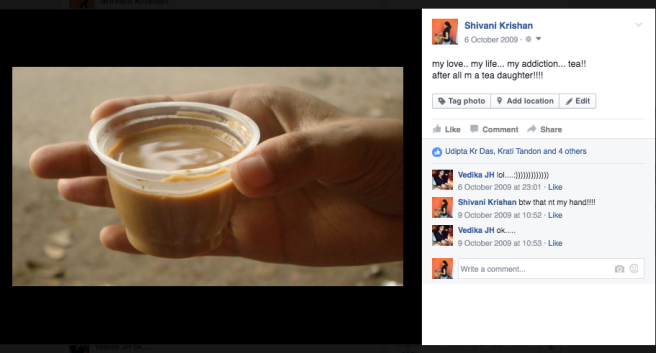 And as 9th grade turned into 10th grade and the dreaded board exams drew near and pressure from family and teachers and nosy relatives grew, the need to stay awake (and energetic) for long hours mounted. And before I realised, from one mug a day, I was on to FOUR giant mugs of tea. Back-to-back.

Hell, yeah! I was a chugher of TEA!

And from being an ice-cream eater, I turned into a tea addict.

And once I walked into a pub and asked if they had tea.

Thankfully, it wasn’t an expensive addiction. 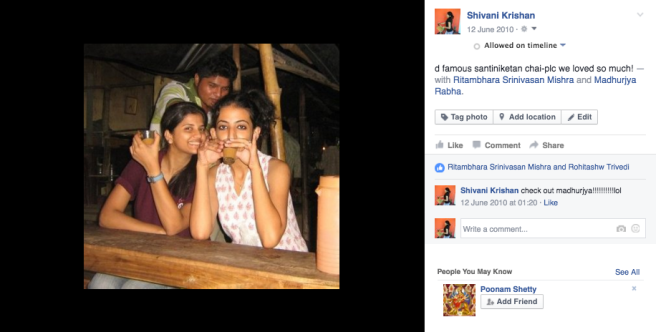 And every time, I read an article detailing the benefits of tea, I was like “yayiee!”

My friends in school would say, “Shivani, you get high on tea. So when you come to my place, I won’t give you tea. Who knows what you may say in front of my family?!”

I don’t know what it is about tea. Maybe, it’s the caffeine that gets me up and about. Or maybe it’s the taste that brings all my senses to attention.

I crave it at parties, at work, in the mornings and just before bed. I crave it at vacations, in between meals and sometimes right after another cup of tea.

So, when I started this blog, I knew, I just wouldn’t be able to write without a tea-fix. And, if you were to listen to my friends, how would I be after a mug of tea?

Shivani Krishan is a MAYO-ite, NIFT-ian and MICA-n, but as if in contradiction to her ‘premier’ and ‘crème de la crème’ (read snobbish) taste in schools and education, she is forever broke, partially depressed for being broke, and is on a constant lookout for something that matches her fluctuating interests.

From ‘Fashion’ in Kolkata to ‘Marketing’ in Delhi, ‘Art Direction’ in Ahmedabad to ‘Copywriting’ in Mumbai, she’s practiced something different in each city. And to bring everything she loves together, she’s started Chai High.

Hope you enjoy this blog.

6 thoughts on “The story behind Chai High”